Construction of the Hong Kong West Drainage Tunnel, designed to alleviate flooding in northern Hong Kong Island, has entered its final phase with the successful tunnel 'breakthrough' in Wan Chai.

The tunnel will divert 30% of stormwater from northern Hong Kong Island upon completion next year.

“The flood protection level in most areas of northern Hong Kong Island will then be able to withstand rainstorms with a return period of one in 50 years. The risk of flooding in commercial and residential areas in Central & Western District and Wan Chai District will be greatly alleviated. Traffic disruptions and disturbances to the public caused by flooding will also be minimised,” she said. 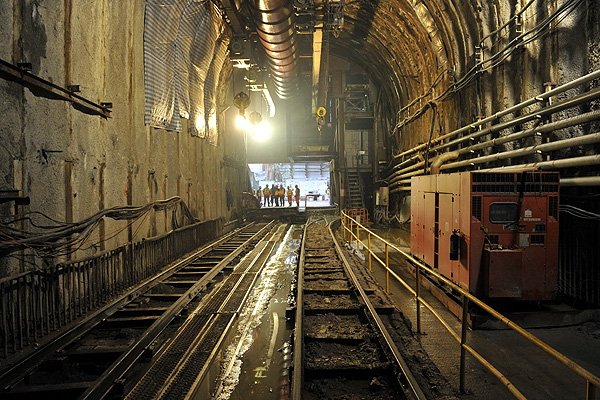 The Government is implementing flood-prevention and sewerage infrastructure projects worth $36.6 billion. Another $20.6 billion worth of major projects are being planned, which will create 4,500 jobs.

“We adopted the approach of stormwater interception by building a drainage tunnel to reduce the extent of traditional drainage upgrading works that would involve extensive excavation in the urban area. We also used the raise boring method to construct most of the intake drop shafts to contain the construction’s impact below ground,” he said.

The project - the longest drainage tunnel in Hong Kong - consists of an 11km main drainage tunnel extending from Tai Hang to Cyberport, 34 intakes and 8km of adits, or entryways, connecting the intakes with the tunnel, which will intercept stormwater collected from Mid-Levels and discharge it directly into the sea.

To shorten the construction period and to minimise the impact on residents, traffic and the environment, two tunnel boring machines were used for excavation.

After the Tunnel Breakthrough Ceremony, a media briefing on flood prevention measures in Hong Kong Island was given by the Chief Engineer/Project Management, Ip Wing-cheung.