The Drainage Services Department (DSD) today (September 5) signed an agreement with the contractor for the major works of the Happy Valley Underground Stormwater Storage Scheme (HVUSSS), marking a new milestone in the development of the flood prevention project for the Wan Chai and Happy Valley districts. Involving various innovative and eco-friendly features, the $678 million scheme is also the biggest New Engineering Contract (NEC) project ever awarded by the Government. It is scheduled for completion in early 2018.
The Permanent Secretary for Development (Works), Mr Wai Chi-sing, and the Director of Drainage Services, Mr Chan Chi-chiu, witnessed the signing of the contract by the Deputy Director of Drainage Services, Mr Tsui Wai, and the President of Chun Wo Construction and Engineering Co Ltd, Mr Derrick Pang.

The HVUSSS mainly includes the construction of an underground stormwater storage tank at the Happy Valley Recreation Ground with a capacity of 60,000 cubic metres, which is equivalent to the total volume of about 24 standard swimming pools, as a temporary storage tank for stormwater runoff collected during heavy rainstorms in a bid to substantially reduce the flow to the downstream drainage system and thereby alleviate flooding risk.

The HVUSSS sees the first application of an automated monitoring system for controlling the stormwater flow diverted from the upstream drainage system to the storage tank, which results in the use of a smaller storage tank. The shallow tank design also enables the water pump to consume less energy and reduces construction time and costs in addressing the needs for both flood prevention and environmental protection. The design won the 2012 International Water Association Project Innovation Awards (East Asia Regional Awards) in the Planning Category in July.
Mr Wai said, "The HVUSSS is the largest NEC project awarded by the Government so far. The NEC emphasises mutual trust and co-operation between the contracting parties and has provisions that increase cost-effectiveness and reduce risk. In drafting the NEC contract for the HVUSSS, the DSD duly expanded the authority of the project manager for handling more flexibly any risks that may arise from the scheme. The HVUSSS project has also adopted the use of tailor-made computer software to upgrade management efficiency."

He added, "The Development Bureau and the works departments are actively planning more than 20 NEC construction and consultancy contracts with a total value of over $8 billion to be commenced in the coming three years in phases. In the years ahead, the volume of public works will remain at a high level and the construction costs will keep growing. We expect to further increase efficiency and reduce the costs of our projects through the NEC mode." 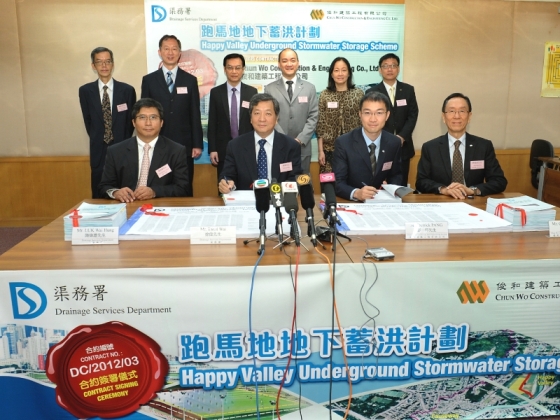 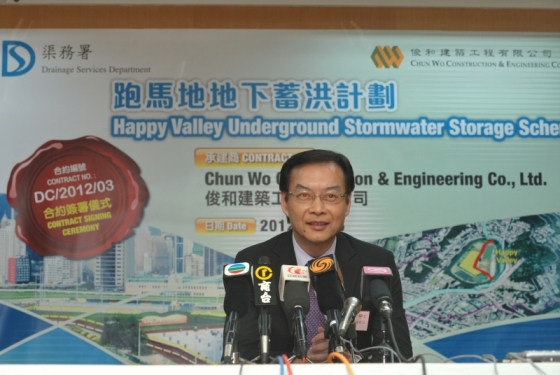 Mr Wai speaks at the contract signing ceremony for the major works of the Happy Valley Underground Stormwater Storage Scheme. 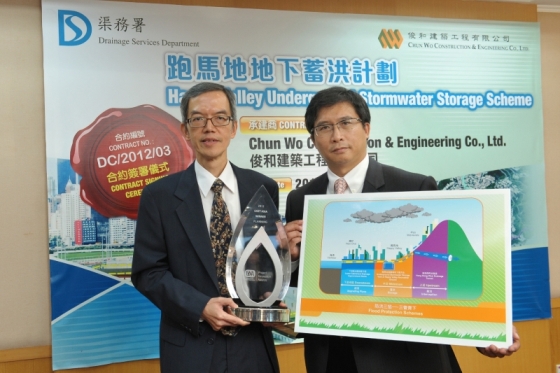