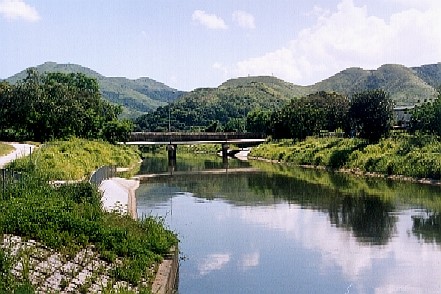 Village flood protection schemes are necessary where the villages are so low-lying that stormwater cannot effectively be drained by gravity to the primary drainage network. The scheme involves the construction of bund around existing village and pumping of stormwater from within the bunded area to an outside channel during rainstorms. To date, 27 flood protection schemes have been constructed and have proven to work well. 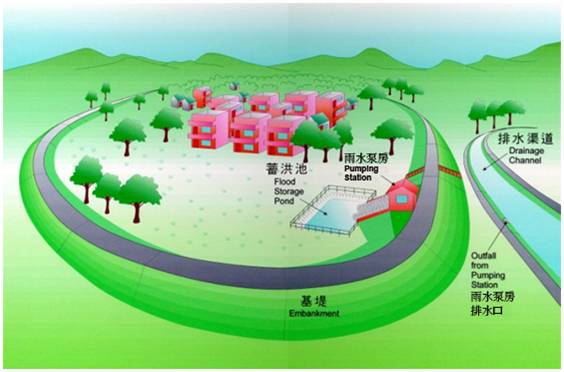 In general, urban areas were equipped with stormwater drainage systems during the urbanization process. In some old towns and aged urbanized areas such as Mong Kok and Sheung Wan, the existing stormwater drainage system were built as a component of the progressive urban development spanning over the past hundred years. Over the years, various local modifications, improvements and extensions to the systems had been made. Nevertheless, some of the urban drainage systems are still inadequate to meet the current flood protection standards.

Drainage improvement works in the urban areas faces a different kind of construction problems. In Hong Kong, most of the roads have already been congested with existing underground utilities such as electric cables, telephone lines, TV cables, gas pipes and water pipes. The conventional type of drainage construction works involving road opening would unavoidably has to go underneath the existing underground utilities and thus aggravate disruption to the traffic, and inconvenience to the public.

In view of the serious disruption and numerous constraints associated with drainage works by open trenching in old urban areas such as the lack of space, traffic and utility diversion problems, we have been striving to minimize these works. Apart from the wider application of no-dig technology for laying stormwater drains, more innovative improvement options including the application of drainage tunnel for interception and transfer of stormwater and the provision of underground stormwater storage scheme for temporary retention of stormwater have been adopted.

During heavy rainstorms, fast and huge flow from the hills would run along the paved areas and steep slopes down to the urban areas below, causing flooding hazards. To resolve these problems, stormwater drainage tunnel is an effective option to divert rain water from upland areas for discharge direct to the sea or river. By employing this method, less rain water would enter the existing drainage systems in the downstream urban areas. Therefore, the flooding risk of the downstream urban areas could be reduced without restoring to extensive drainage upgrading works that would cause traffic impact and public disturbance.

Location plan of the drainage tunnels 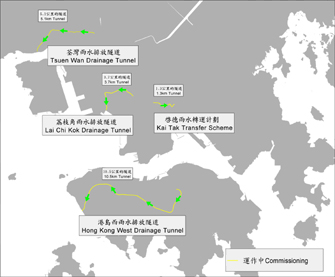 Stormwater storage approach is often used when the capacity of the downstream drainage network is incapable to cope with the increased peak flow rate arising from the development at upstream areas. Urban development usually propagates from the downstream. When the upstream areas are being developed and the downstream areas have already been fully urbanized, the conventional method of upgrading the drainage network at the downstream areas will cause severe disturbance to the traffic and public, not to mention congested underground utilities that would cause great constraint to drainage construction. The Tai Hang Tung Stormwater Storage Scheme and Happy Valley Underground Stormwater Storage Scheme, which are the integral part of the West Kowloon drainage improvement scheme and Happy Valley drainage improvement scheme respectively, were constructed to address the flooding threats in Mong Kok and low-lying area of Happy Valley and Wan Chai.

Wing Lok Street, situated in a low-lying area affected by tidal back flow, was a flooding blackspot in the Central and Western District in the past.  To provide long-term solutions to the flooding problem, a tide gate was constructed to prevent tidal back flow, and also an underground stormwater storage tank and a pumping station at Chung Kong Road, Sheung Wan, were constructed to provide a new drainage path for stormwater from Wing Lok Street.