Sheung Wan is one of the earliest settlements in Hong Kong. Most of the infrastructures including the existing drains in the district were designed and constructed decades ago. The flow requirements and standards at that time could not cater for current urban development.

The areas of Bonham Strand, Wing Lok Street and Man Wa Lane and their vicinity, form a low-lying area of about 10 hectares with ground levels between +2.64 mPD to +3.85 mPD. With the presence of annual high tide +2.8mPD at the water front of Sheung Wan, this low-lying area is susceptible to flooding during heavy rainstorms. Especially when high tide level is even higher than the ground level of the low-lying area, seawater may be flowed back from the outfall at the seafront and spilled over from the manholes and gratings.

There were 3 serious flooding incidents at Sheung Wan low-lying area in July 2001, June 2005 and July 2006 with maximum flood depth of up to 700mm. It seriously affected this famous shopping place for dried seafood and swallow’s nest and also the residents in the district. As such, DSD was committed to resolve the flooding problem to reduce the risk of flooding during heavy rainstorms. The project consisted of two parts, namely “Intercepting Drains at Queen’s Road Central” and “Sheung Wan Stormwater Pumping Station”.

The construction of the Intercepting Drains at Queen’s Road Central was under the PWP No. 4143CD. The scope of the project is to construct about 530 metres (m) of stormwater drains ranging from 900 millimetres (mm) to 1,500 mm in diameter along Lok Ku Road and Queen’s Road Central, and a single cell drainage box culvert of about 130m with internal size 2.25m wide and 1.25m high along Gilman’s Bazaar. The objective of the project is to reduce the risk of flooding in low-lying area in Sheung Wan by intercepting about 30% of the surface runoff from the mid-level of Sheung Wan and hence relieving the loading on the existing drainage system during heavy rain. The construction works commenced in March 2006 and was substantially completed in June 2008. The project cost was about HK$46 million.

In the original design, there were only about 42% of the drains by length was required to be constructed by trenchless method. Having considered concerns raised by Central & Western District Council, nearby residents and shop owners about possible impact from our construction works, the project team had hence carried out a further detailed design review and cost effectiveness analysis, and eventually increase the extent of drains laid by trenchless method to 510m or 77% by length.

As interim measures to minimize the flooding impacts during construction period, DSD deployed an Emergency Team in Sheung Wan. They stood by at the junction of Wing Lok Street and Hillier Street with necessary tools (including pumps, plastic hoses, pipe cleansing tools) within two hours after red / black rainstorm warnings issued. They also inspected the drainage conditions and carried out necessary on-the-spot drainage clearance works to relief flooding problems in Wing Lok Street and its adjacent low-lying areas. The Emergency Team faced a major challenge on 7 June 2008, when the black rainstorm warning with historical rainfall of 302mm from midnight till 6pm and the design capacity of the existing drainage systems exceeded, resulting in serious flooding in Wing Lok Street and its adjacent areas. The most serious flooding spot was at the junction of Hiller Street and Bonham Strand with flooding depth of as much as 1.5m. With the hard work of the DSD’s Emergency Team, these areas were reinstated very quickly after the rainstorm and their efforts were much appreciated by the local residents and shop owners.

DSD values the communication and liaison with the locals. During the construction, a 24-hour hotline was established to serve as a communication channel with local shops and residents. For any enquiry received via the hotline, an interim reply would be made within two hours. Moreover, newsletters were regularly published and distributed to all residents and shops along Lok Ku Road, Queen’s Road Central and Gilman’s Bazaar to inform the public the latest progress of works and highlight the detailed information regarding the next phase of construction works. Our construction team had also visited the neighboring shops and residents regularly to collect opinions and views. Site improvements would be implemented immediately to address the public’s concern in a proactive manner.

The “Sheung Wan Flood Watch System” was launched in April 2006 and relevant shop owners and residents in Sheung Wan were invited to register for the service such that the latest flood-related information can be distributed to the registrants. For instance, short message service (SMS) or voice messages would be sent to registered subscribers under red or black rainstorm warnings, astronomical high tides or typhoon warnings. A Flood Watch hotline had also been set up for the public to enquire the latest flood-related information in Sheung Wan district. Such system continued to serve the public until 2 years after commissioning of Sheung Wan Stormwater Pumping Station and Queen’s Road Central Intercepting Drains.

In the course of construction, DSD received letters of appreciation from the local stakeholders. These letters of appreciation and support provided a real boost to DSD. The works were eventually completed two months ahead of schedule. This project was also honoured to receive the Champion of the General Public Service Award in the Civil Service Outstanding Service Award Scheme 2009. 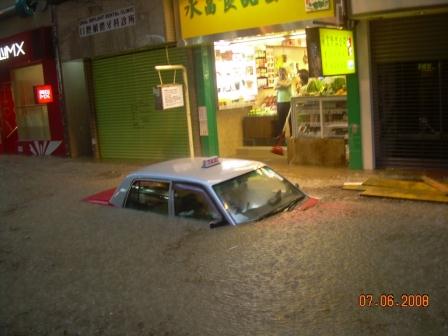 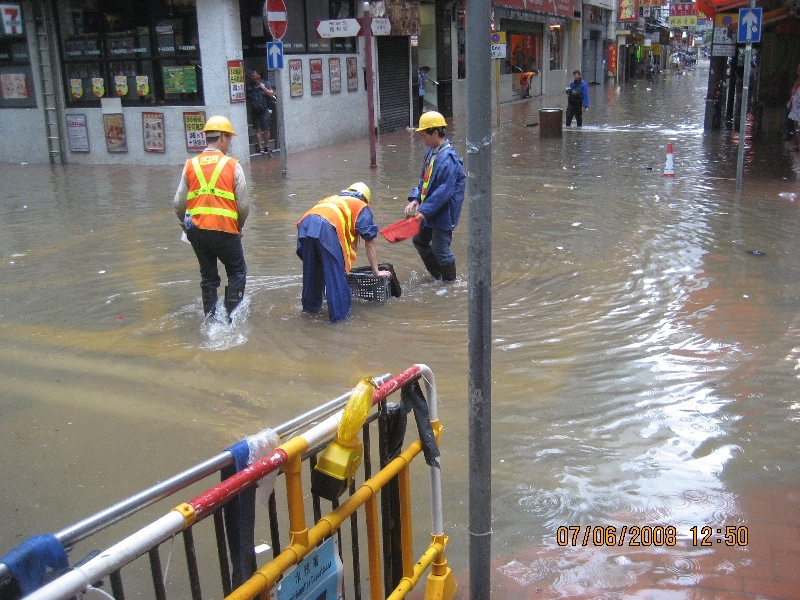 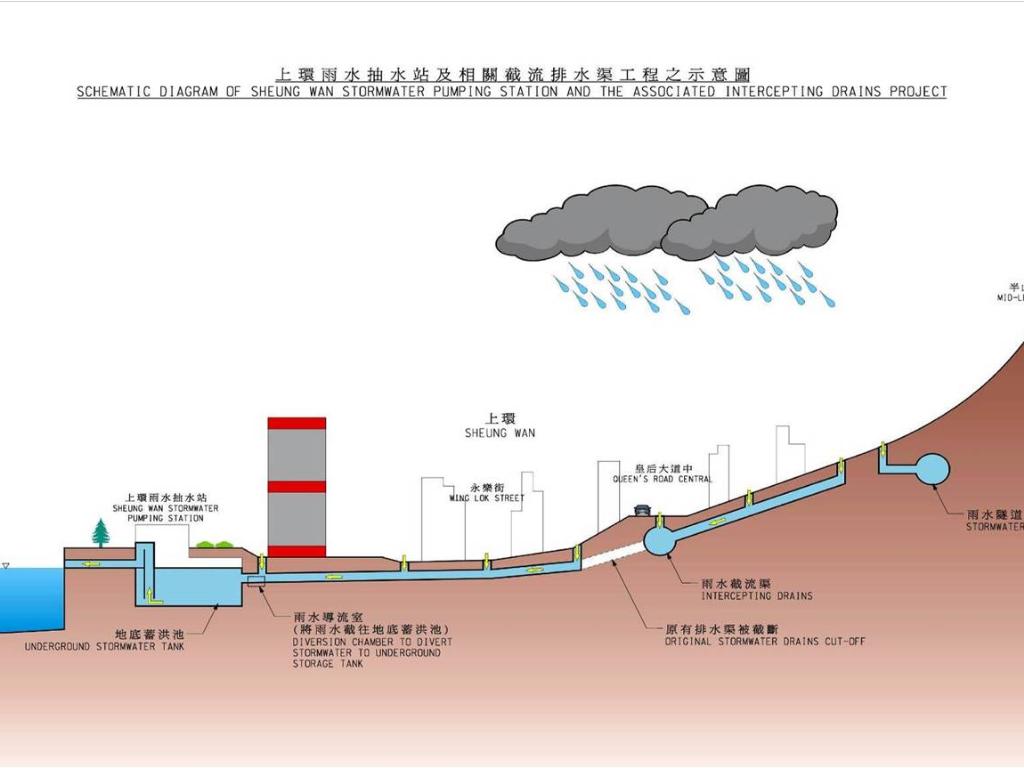 Illustration of The System